My Life As The Queen's Trumpeter - Peter Cripps 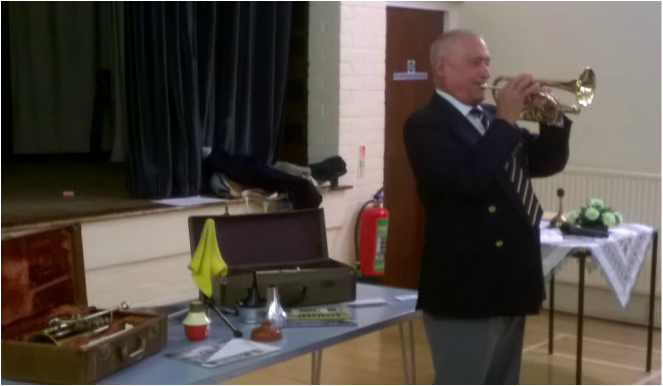 Peter Cripps told us how he started playing the trumpet as a 7 year old boy with the Salvation Army Junior band. His natural talent saw him enlisting as a boy musician with the army and being selected to play at Her Majesty's Coronation. He was the youngest player there and afterwards met the young queen at the Buckingham Palace reception. He was a bandmaster in the army for many years and also got to play with many leading artists of the time.

He demonstrated his collection of instruments and the different tones they produced. He rounded off the evening with a rendition of 'Its a Wonderful Life'.

Marion thanked everyone for their support of the Big Breakfast in aid of Force, £951 was raised.
The Christmas party dinner will cost £12.
The 1st skittles match is on 22nd Oct at the Cat and Fiddle, supporters are welcome. A social skittles evening is to be held on Friday 20th November at the Blue Ball, coat £8 includes a buffet.
The choir is holding a concert at Sidholme 3pm Thurs 22nd Oct. Your support would be appreciated. Donations to go to the Admiral Nurse Appeal.

Julia gave a report on the Devon Autumn Council which was held in Plymouth. Dame Esther Rantzen spoke about Silverline. It receives around 12,000 call a day. If you know anyone who would benefit from a weekly call the number is 0800 470 8090. She hopes that WI members will offer their support.
Helen Pearce told us about the Shekinah Mission which operates in Plymouth and Torbay. It supports people affected by homelessness, drug related problems, mental health issues, ex-offenders and the long term unemployed. Through its education and training facility is has a success rate of over 70% in getting people into long term work.
Competition - an item of royal memorabalia