Mary Andrews from Devon Federation was on hand to oversee the election of the officials. Marian was confirmed as president for another year supported by the reinstated committee members. A plea was made for members to come forward to serve as committee members, in particular Beryl urged the need for someone willing to takeover the role of secretary.

The Competion Cup was awarded to Rosemary Hearst who had accrued 90 points. Marianne Rixson cmae 2nd with 86 points and Christine Bull was 3rd with 64 points.

Beryl McIndoe representing Sidmouth museum gave a short talk on the setting up of the current exhibition on '100 years of Women's Suffrage'. This utilised the costimes from the period that are part of the museum's collections.

It is planned to enter Sidmouth Carnival this year in the category of 'Walking Group'. The theme is ' Call the Midwife' and Margaret Newman asked for assistance and support. She also wants to hear from anyone who can loan 50s style bicycles.

The meeting finished with entertainment from the choir who were accompanied by Pat Hague as the musical director Frances Archer was on holiday. The choir's repertoire included some songs that all could join in - Gone Fishing, Spread a Little Happiness and Hey, Little Hen. 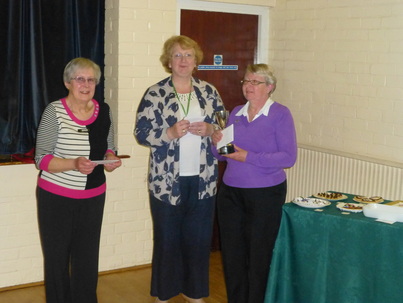